Tropical North Queensland is an incredibly vast area with a diverse range of vegetation types, birds and wildlife. Each region listing below includes which iconic birds might be seen and the key guides and accommodations of that area.

The coastal zone of tropical north Queensland extends approximately 450 km from Cooktown to Townsville, and is the relatively narrow coastal strip between the highly scenic forested slopes of the Great Dividing Range and the sea.

Most land-based tour guides can provide day-tours, particularly multi-day tours, starting/finishing in Cairns. Great Northern Birdwatching Tours is based in Cairns. Birdwatching Tropical Australia is based in Mossman/Port Douglas. Villa Marine Holiday Apartments and Thala Beach Nature Reserve are located in this zone. SeaStar Cruises, which visits the birding hotspot of Michaelmas Cay, is recommended for a visit to the Great Barrier Reef.

The Atherton Tablelands is approximately a 90 minute drive from Cairns. On rolling green hills, agricultural grazing and cropping is interspersed with areas of remnant rainforest. The highest mountain in Queensland, Mt Bartle Frere (1622m) is located in this region. Due to elevation, this region is often 4 or 5 degrees cooler than Cairns.  All 15 of the endemic bird species of the Wet Tropics can be found in this region. Additionally a great range of iconic mammals occur here including Lumholtz Tree-kangaroo, Platypus, Striped Possum, Lemuroid Possum and Green Ringtail (amongst many more).

Mareeba, Mt. Molloy and Julatten (unofficially grouped as the Northern Tablelands) is a vast area, 1 to 2 hours drive north and west of Cairns. West of the Great Dividing Range running north-south, this region is generally a little drier than other areas.

Elevation is about 400m with some peaks rising to 1200m. Dry grassy grazing country is interspersed with crops of all kinds. Areas of both wet and dry sclerophyll eucalyptus forest persist with higher peaks of rainforest.

Key birding sites around Mareeba include the Emerald Creek, Tinaroo Creek Road and Pickford Road. Key birding sites around Mt Molloy include Lake Mitchell and the township itself. Speciality birds of these sites include dry country birds such as Pale-headed Rosella, Squatter Pigeon, Red-winged Parrot, Great Bowerbird, Brown Treecreeper and Blue-faced Honeyeater. Key birding sites around Julatten include Mt Lewis, Abattoir Swamp and Mowbray National Park. Speciality birds of Mt Lewis (950m elevation) include the majority of local endemics such as Golden Bowerbird, Victoria’s Riflebird, Tooth-billed Bowerbird, Chowchilla and Fernwren. It is also a site for Blue-faced Parrot-finch. Speciality birds in and around Mowbray National Park include Buff-breasted Paradise-kingfisher and Chestnut-breasted Cuckoo. Most land-based tour guides can provide day-tours in this region. Sweetwater Lodge is a located in this zone.

The Kuranda region, is centred around the small town of Kuranda, located in mid-altitude rainforest at about 330m. Kuranda is located about 40 mins north-east of Cairns.

A combination of birding and sight-seeing is easily done, with the Kuranda SkyRail one of the major tourist attractions of the Tropical North, with its sensational views over and into the rainforest.

The Daintree region is largely defined as the area from Daintree Village then across the Daintree River north through Daintree National Park to Cape Tribulation. Thorton Peak (1374m) is the highest hill in the local area and dominates the skyline.

Central Queensland and the Gulf of Carpentaria is a vast area with some great birding that is sometimes accessed from Cairns. In general, the central area of Queensland in many cases is the northern limit of several birds with a main range further to the south and west.

Additionally, the far west area of Queensland in many cases is the eastern limit of several birds with a main range further to the west. The Far West region has three endemic species – all Grasswrens (Rusty, Kalkadoon and Carpentarian). This region is also well known for several major dinosaur attractions including Lark Quarry and The Age of Dinosaurs.

Many of our land-based guides conduct regular scheduled multi-day tours to both the Gulf Savannahs and Cape York Peninsula. In general these are for small groups of half a dozen or less. Tours may be private and can be customised specifically for your viewing and photographic hopes.

The ‘Cape’ is an under-explored paradise with a large number of iconic birds, highly sought-after by keen birdwatchers.  Cape York Peninsula begins north of Cairns, extending almost 1000 kms to the geographical tip of Australia in the north.

It covers about 137,000 square kilometres – the Coral Sea is to the east of the Peninsula, the Torres Strait to the north, and the Gulf of Carpentaria to the west. The flora and fauna of this incredible area is influenced by its proximity to Papua New Guinea. Cape York has three endemic species (Golden-shouldered Parrot, Northern Scrub-robin and White-streaked Honeyeater). 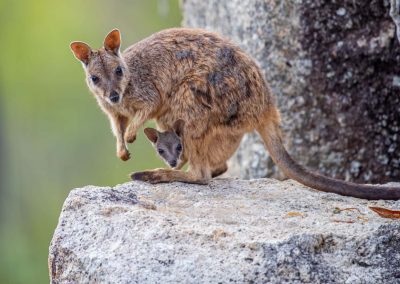